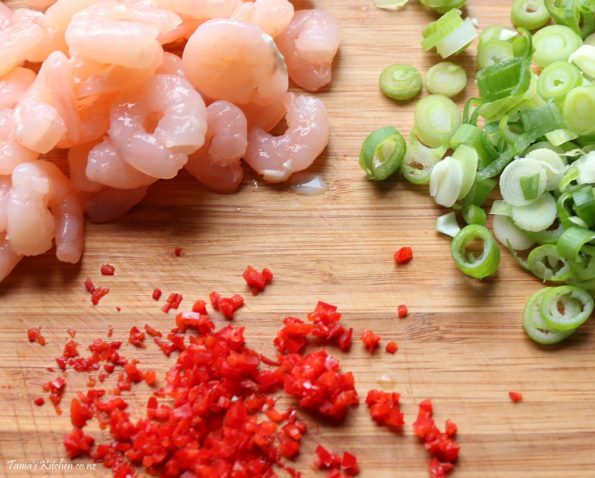 Most kiwis love dip and we enjoy it often in the summer months but maybe not so much in the winter because it’s usually served cold. I had some crème Fraiche at ‘use by’ in the fridge and some shrimps so made this Oven Baked Chilli Shrimp Dip, to be enjoyed hot…..yes hot, whilst watching the ‘rugger’! AWESOME!

Red chillies are the hot members of the capsicum family. Just like capsicums, the bright red colour is a sign that the chilli is fully ripe. Red chillies are just as spicy as green chillies but have a mildly sweet flavour due to the longer ripening time.

So this dip is made with crème Fraiche and mayo combined as I thought crème Fraiche alone is a bit bland and just using mayo would be too tangy, also mayo is a bit thicker and I was worried about just using crème Fraiche it would be too runny when it was heated. I added mozzarella for that awesome stretchy cheese effect when dipping and also because it’s nice and mild and won’t overpower the little shrimps. I threw some parma on top because…..just because it’s awesome! and even though it’s strong, it’s only on the top and forms a lovely baked crust. There’s some garlic salt in there, lemon juice, some spring onions and a fresh, red chilli…..

Red chillies are the hot members of the capsicum family. Just like capsicums, the bright red colour is a sign that the chilli is fully ripe. Red chillies are just as spicy as green chillies but have a mildly sweet flavour due to the longer ripening time. At first, I only added half a red chilli pepper to this dip thinking it was plenty but after tasting it added the other half and…..it blew my head off! Nah, just kidding, even my daughter who hates spicy food thought it was fine. We went to friends for dinner once and she’d slaved away all day preparing us the most amazing Thai meal. It looked amazing, colourful and flavourful and I couldn’t wait to dig in. but after one spoonful my lips were on fire and so were ‘hubbies’! Our friends were fine, not even flush-cheeked whilst I thought I was going to spontaneously combust! Why were they enjoying theirs like nothing was going on? She grows her own chillies and included the seeds in her dish. My point of this story is that all chillies are not equal, some are just damn hot! Shrimps have such a mild flavour so you don’t really want this dip to be too hot so you can’t taste the shrimp at all. So I suggest adding half the chilli and then tasting it and if it’s mild, add the other half (especially do this if you got your chilli from a Thai chefs garden!).

To Serve – Chips and crackers of course! I made crostini because I love those lil’ toasts 🙂

First, place the shrimps on a few paper towels to get rid of any excess water.

Next, slice the chilli down the centre lengthways and then use the tip of your knife to scrape out the seeds.

Then slice each half into long, thin strips and very finely dice them up. 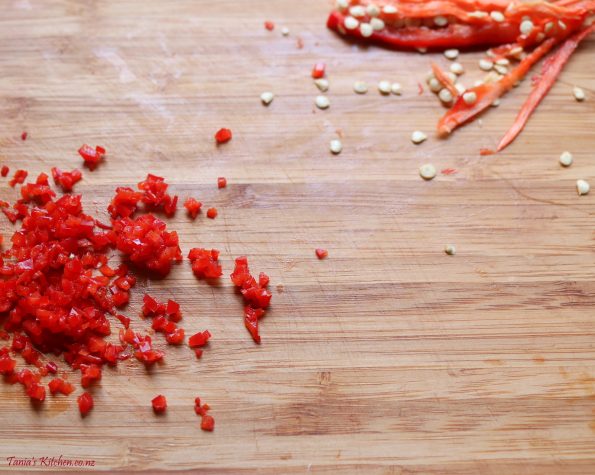 Then put all of the ingredients into a food processor but only add half of the chilli pepper.

Using the blade attachment, pulse it a few times until the prawns are cut into around two or three bits. I would describe it as ‘chunky’, as long as it’s not smooth, you want a nice texture to it.

Then taste it and decide if you’d like to add the rest of the chilli and if so, just give it a little blitz to mix it through. 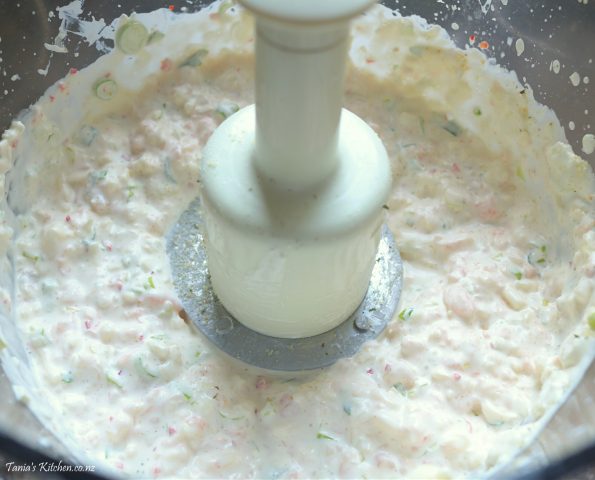 Scrape the dip from the processor and place it into a 3 cup capacity, ovenproof dish.

Then sprinkle the grated parmesan all over the top and….. 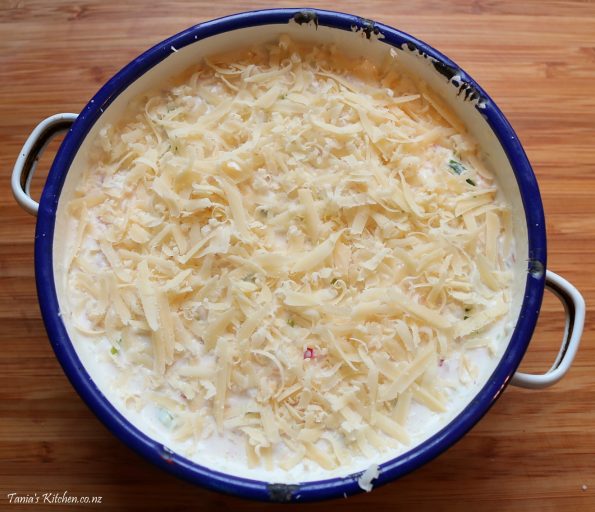 …..bake in the oven for 20 minutes or until the parmesan is golden and the dip is heated through or if you are heating it up later, cover it with cling wrap and place in the fridge. 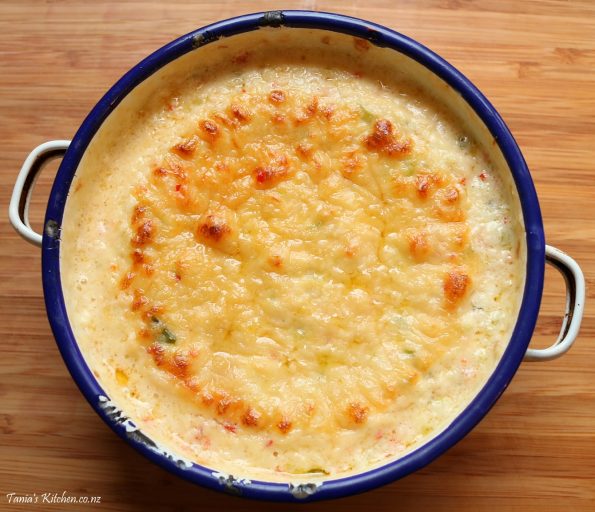 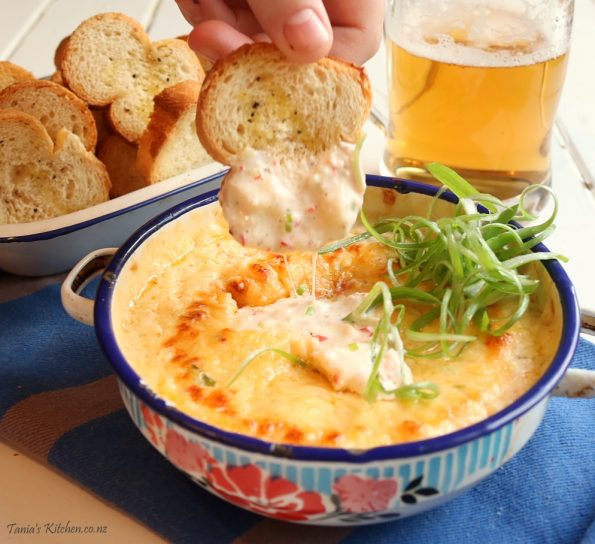 If you’d like to garnish it with curly spring onions too, it’s easy to do.

Just slice a spring onion very thinly lengthways and submerge the thin strips into icy water until they curl up. 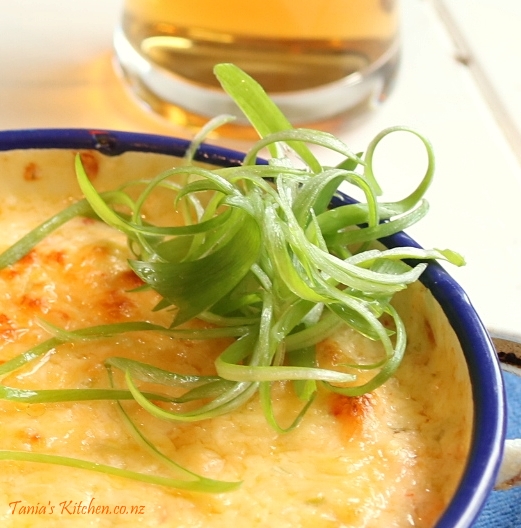 If you want to have crostini with your dip also but have never made it before, it’s straightforward, here’s how I do it. 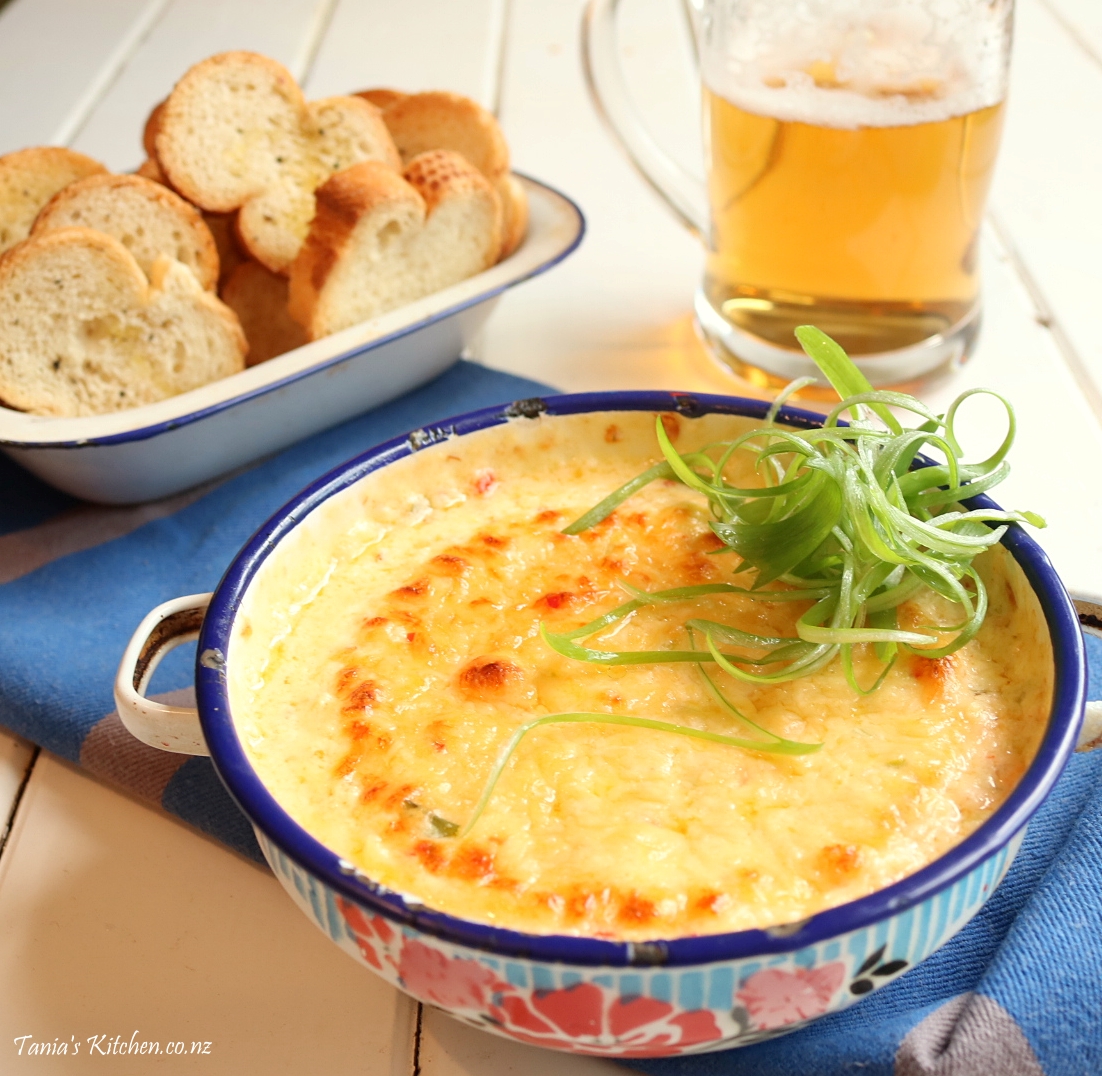