How To Make Berry Compote

Hello! My youngest had a sleepover in the weekend for his tenth birthday and of course he requested (more like expected) pancakes for breakfast. So the boys had chocolate chip pancakes, whipped cream and this here compote, more like having dessert for brekkie really!

This is a simple ‘throw it all in a pot’ mixed berry compote and it’s to die for! A beautiful accompaniment for cheesecakes, chocolate cakes, pancakes or French toast, if you are looking to go that extra mile for a special occasion. Most of the berries stay whole, but soften and the sugar melts with the fruit juices and makes a beautiful syrup. It’s winter so I’ve used frozen berries, they make a great tasting compote and are less expensive. I’ve used three different kinds but of course you can use a bag of ready mixed berries or the one type of berry or a mix of your favs, as long as you stick to the three cups in the recipe. I personally love sweet little raspberries and would never make it without them! So here’s how I make it…..it’s super easy too!!

Optional – To add a bit of acidity with a slight taste of fruity wine, mix the cornflour with red wine vinegar  instead of water….I totally recommend it, if you have it in the pantry.

Optional – You can add a 3 cm (1.5 inch) vanilla bean (add the scraped seeds and the pod) at the beginning.

Optional – A tiny bit of orange zest is nice too but not too much, maybe just half a teaspoon.

First mix the cornflour with the water (or the red wine vinegar if using it) and then set it aside (this is called a slurry). 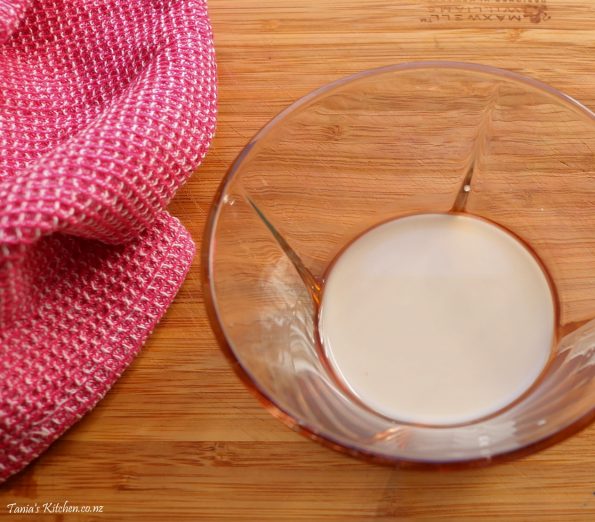 Place the strawberries, the blueberries and the sugar (also the vanilla seeds and pod if you are using it) in a medium sized saucepan and over a medium/low heat stir often for 10 minutes. 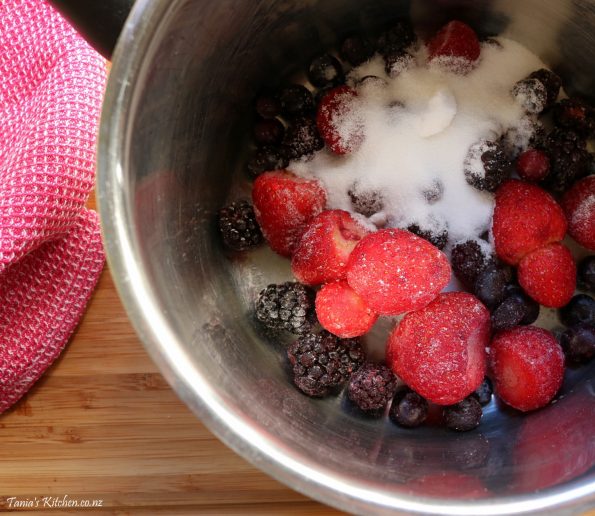 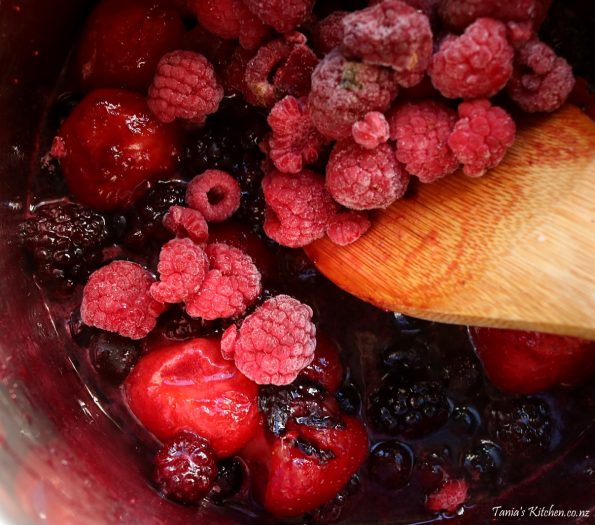 That’s it, all done! Gorgeous isn’t it, couldn’t you just grab a spoon and eat it all now?!

Compote is amazing served warm with cakes and all sorts of desserts like bavarois, pavalovas, mud cakes, ice-cream and cheesecakes. I’ve added gelatine to this and used it as a cheesecake topping also, sooo good!

It also goes great served warm with a special breakfast, like pancakes or waffles and I love it with French toast, especially when you’ve toasted a sweeter bread like brioche or banana bread. It’s also nice with yoghurt, porridge (oatmeal) and any spare can go into smoothies or folded through natural yoghurt 🙂 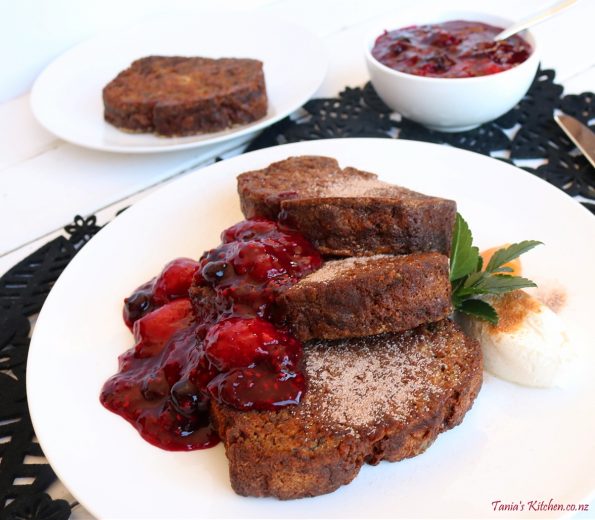 Storage – Keeps for a week, covered in the fridge.

Which are your favourite summer berries? 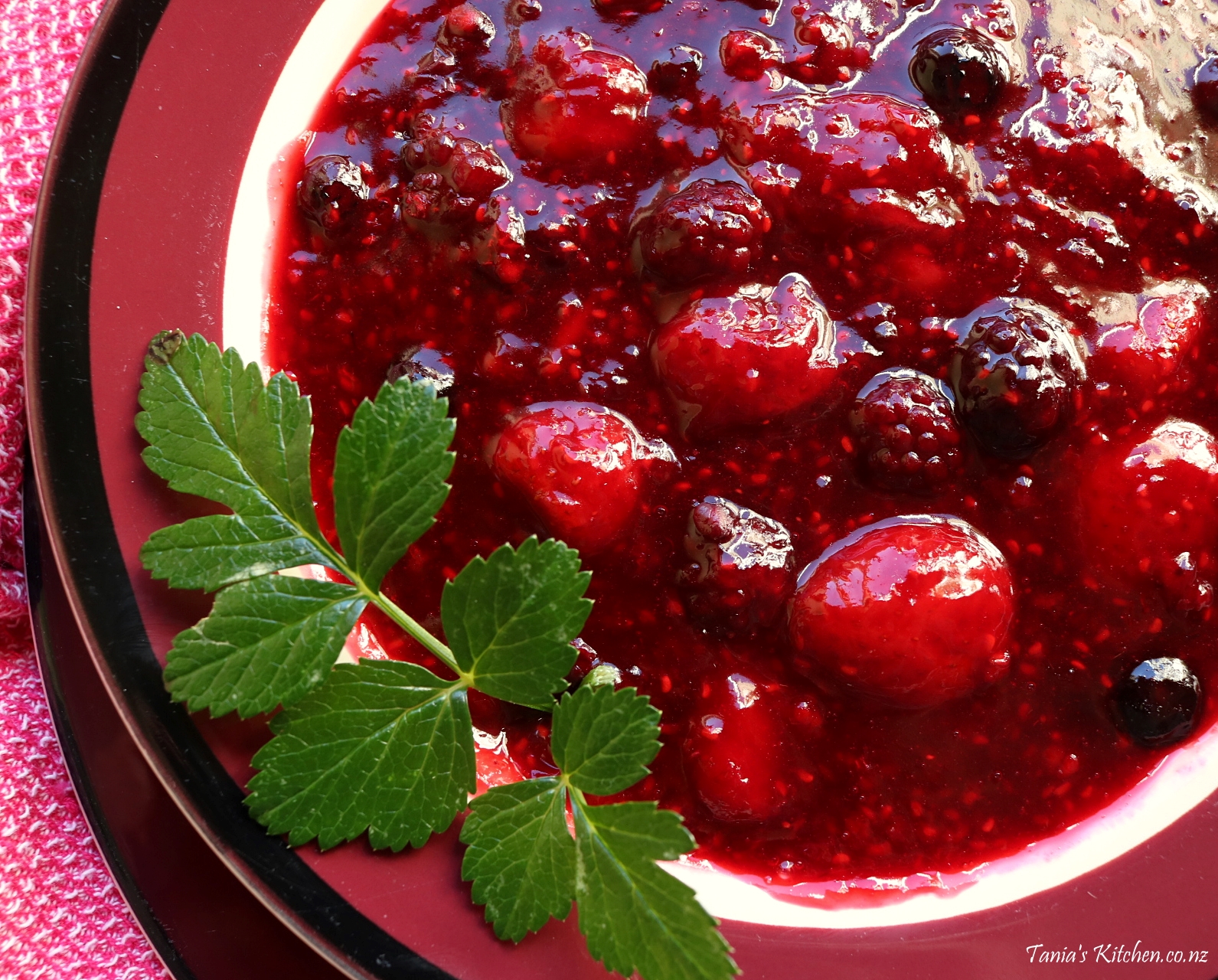