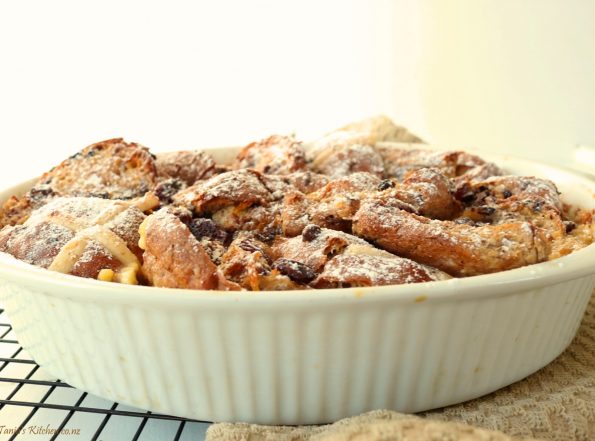 Who enjoys the first few Hot Cross Buns out of the bag during Easter and then the rest lie around in the pantry going stale? Guilty! Just because I am a sucker when it comes to buying two for one specials at the supermarket. So I ended up with a few bags in the freezer and what better thing to do with them but make an Easter Bread ‘n’ Butter Pudding?!

The creamy orange and vanilla custard soaks into the bread as it’s baking so it’s soft inside, while the bread on top still remains a bit crusty, so it’s nice having the two textures. Because it’s an Easter pudding, of course, I had to throw in some chocolate, extra sultanas and some cinnamon 🙂 It’s a tad Jaffa flavoured with orange zest in the custard and I’ve spread marmalade on the bread as well as the butter.

We loved this pudding, it really tastes great, a perfect Easter dessert (or in his case three weeks on)….geez….who’s a wee bit behind then?!

If not out already, place both butter measurements out on the bench as they need to be softened.

The oven-proof dish I used is an oval 28 cm L x 20 cm W x 6 cm D and holds 10 cups (2.5 litres) of liquid, anything round, square or rectangle but close to this size would be great. Just remember though a much larger, shallower dish and it will be cooked sooner and if you use a smaller, deeper dish it will take longer. If I’m following a recipe I try to stick pretty close to the same size to help with my success rate 🙂

First, grease the entire inside of the dish using the first measure (1 teaspoon) of butter and then sprinkle the tablespoon of sugar all over the inside, moving the dish around to help it stick to all of the butter.

Then, slice the Hot Cross Buns into three slices each (sideways) so you have 18 slices. 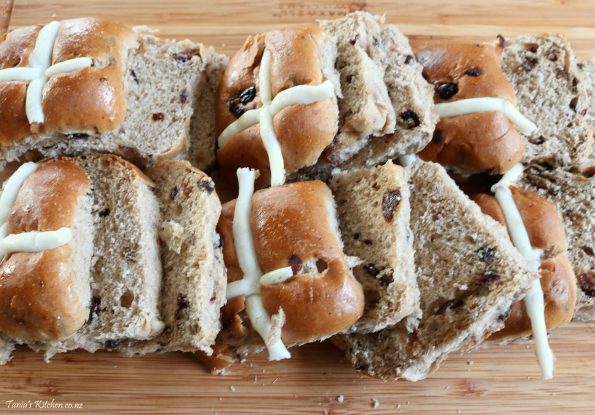 Now using the 50 grams of butter, butter one side of each slice (including the underside of the bit with the cross on it), then spread the marmalade thinly on top of the buttered sides.

Layer the buns (buttered side up) any way you like into the dish, making them as pretty as possible. 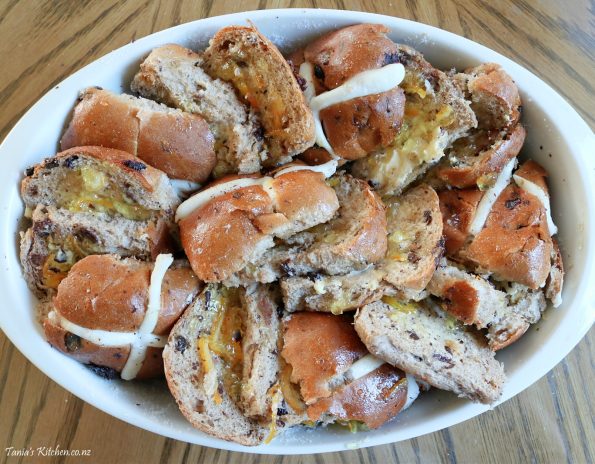 Now, using a large knife chop the chocolate up into small pieces. 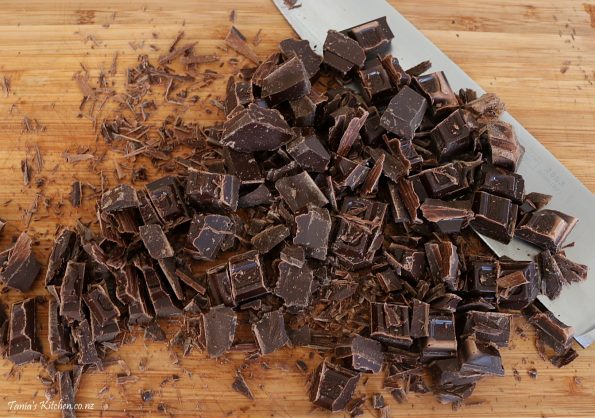 Next, sprinkle the sultanas and chocolate over the bread. I lift up the bread here and there to allow three-quarters of it to fall in between the slices.

Set aside while you make the custard. 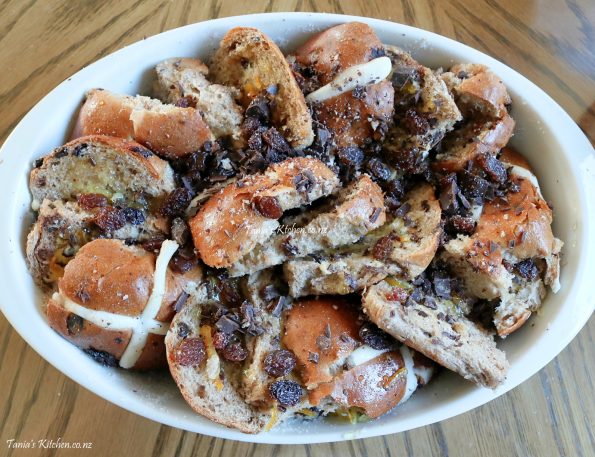 To make the custard filling, pour the milk and the cream into a medium-sized saucepan and add the orange zest.

Also, add the vanilla essence or if you are using vanilla bean scrape the seeds from the pod and add the seeds the milk (throw the scraped pod in also). 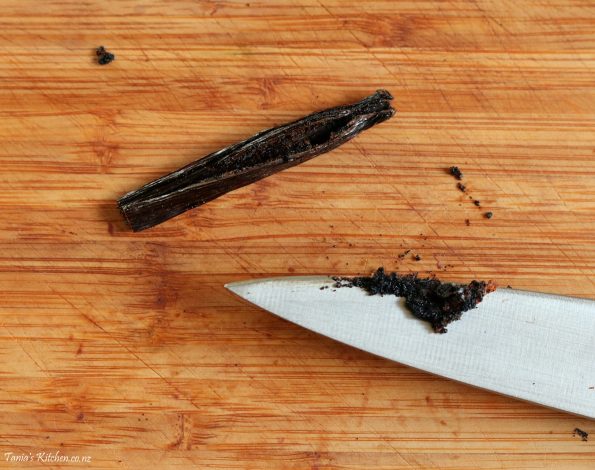 Crack the eggs into a medium-sized bowl, add the ¼ cup of sugar and whisk the two together until combined and frothy. 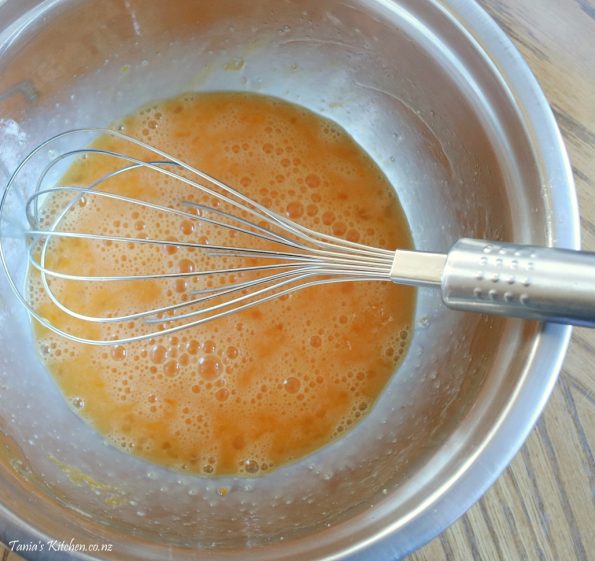 Over a medium/high heat, heat up the milk, the orange zest and the vanilla until it is just starting to foam and rise up (around 3 minutes) and then remove the saucepan from the heat.

And…if you added it, remove and discard the vanilla pod. 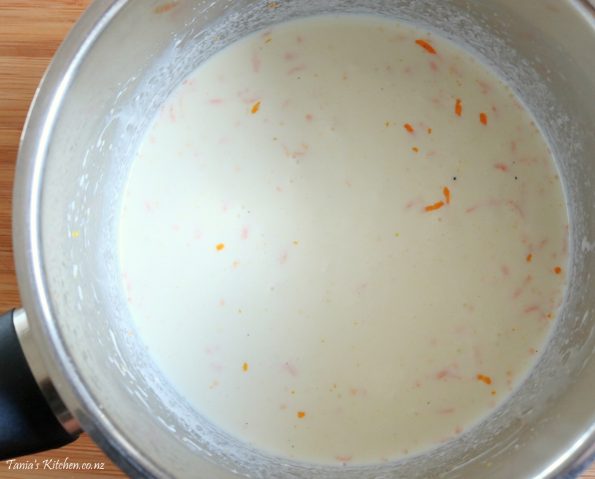 Whilst quickly whisking, pour the hot milk into the bowl with the whisked sugar and eggs and continue whisking until it’s totally combined. 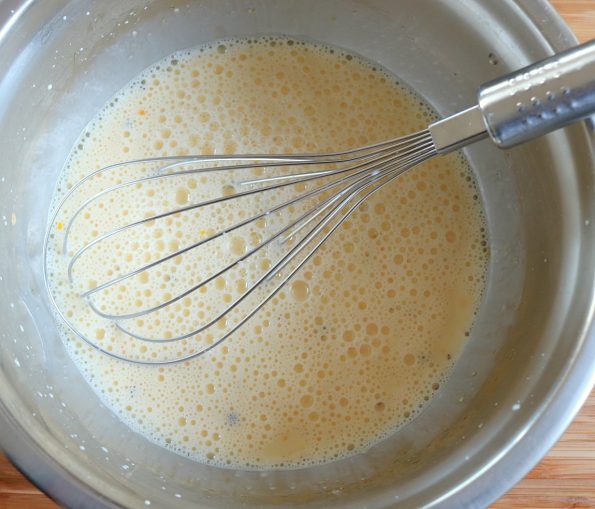 Whilst hot, pour the runny custard very slowly over all of the bread (if you like you can transfer it to a pouring jug to make it easier). 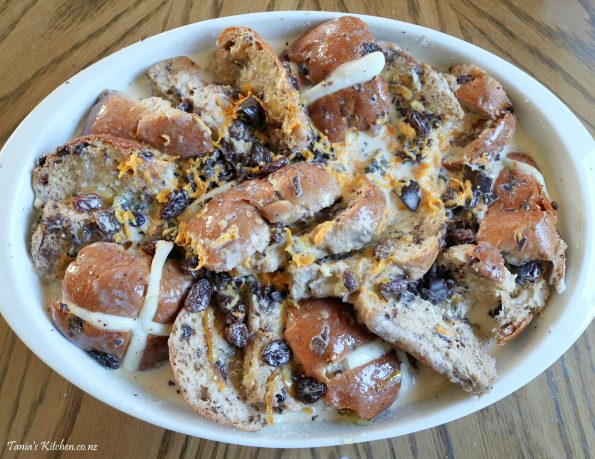 Next mix together the 2 teaspoons of sugar with the cinnamon and sprinkle this all over also.

Then place the pudding in the oven for 30 minutes.

Here it is, out of the oven and dusted with icing sugar (confectioners sugar). Soft and creamy on the inside with bits of gooey chocolate and a lovely, crusty top. 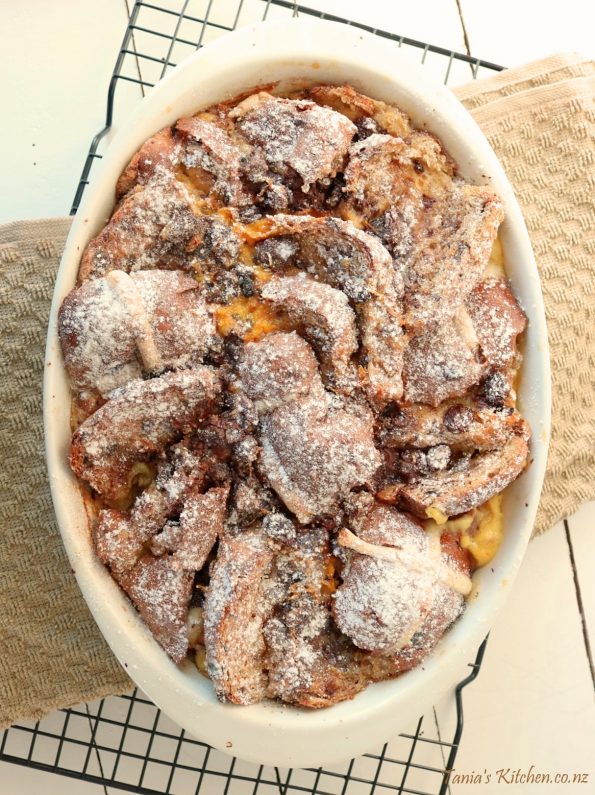 I prefer to eat it when it’s warm and with chocolate ice-cream! 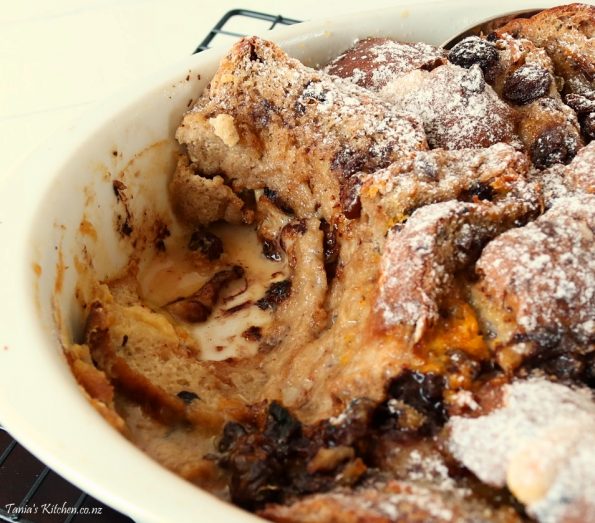 Storage – Keep covered in the fridge up to 3 days. To re-warm, microwave individual portions or cover in cooking foil and place in a really low oven (140°C fan bake oven or 160°C conventional oven, on bake) until it’s warm (not too hot as it may ruin the custard). 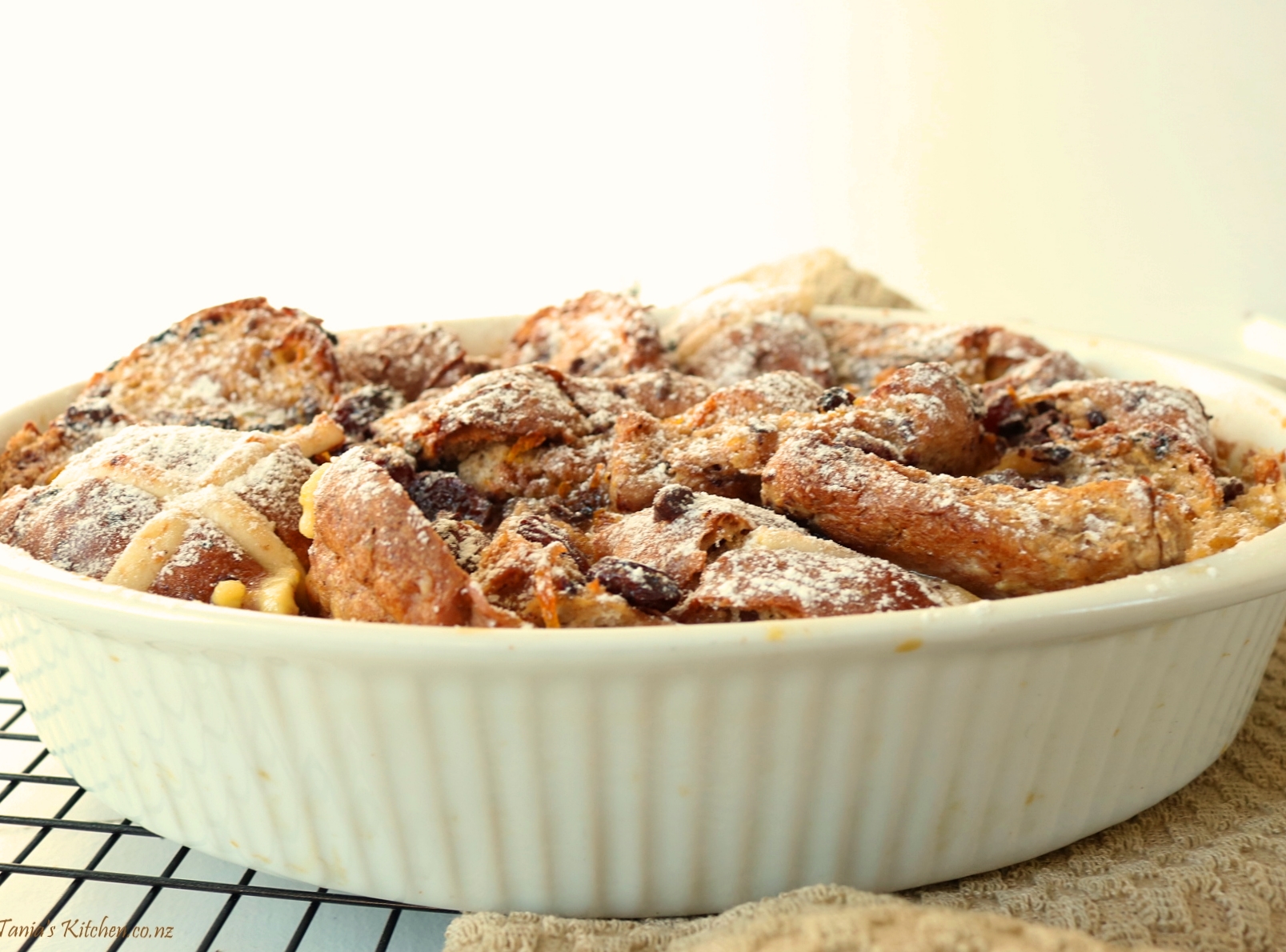