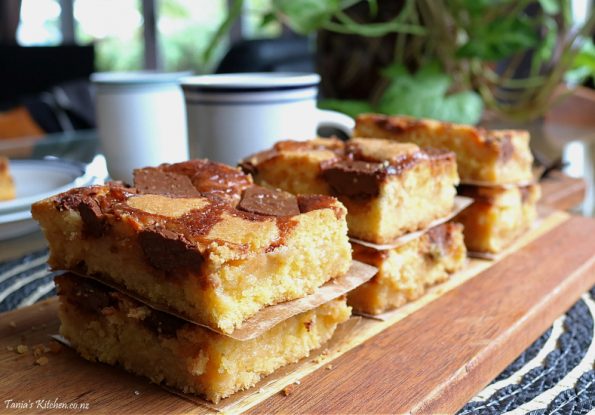 This soft, slightly crumbly Caramel Slice just melts away in your mouth. It has custard powder in the base which gives it a lovely flavour and a tender texture. It’s has a condensed milk caramel filling and chunks of milk chocolate on top. It’s an absolute winner with the kid’s, no oats or nuts or fruit, so of course they love it! I gave some to the neighbour today and just got a text from her saying, “That Caramel Slice is to die for!”.

‘Caramel Slice’ was first called that in an Australian Woman’s Weekly Cookbook in the 70s, but the recipe originates from Scotland where it was called ‘Millionaires Slice’. The original version has a shortbread biscuit base, a caramel filling and is iced with milk chocolate, so nearly exactly the same as Caramel Slice but with the famous Scottish Shortbread as its base.

This recipe came with a Café my family bought and was hugely popular, with there being several owners before us, I am not sure of its origin. I used to make a huge commercial tray most days, this recipe is a fourth of that size.

First, get the chocolate ready. I don’t just roughly chop it up like I do in biscuits and muffins because this chocolate is right on top of this slice for everyone to see (hate to think how many times I annoy everyone at work saying “people eat with their eyes”), so I chop each piece in half, either into two little rectangles or two triangles. I don’t really like the way buttons look myself, but they are fine of course.

Next, preheat your oven to 150°C fan bake / convection oven or 175°C conventional oven, on bake. Place a rack in the centre of the oven, so that the top of the slice tin should be as near to the middle of the oven as possible.

I make the caramel before I start the base, so next place the second measure of butter and sugar with the golden syrup in a saucepan. 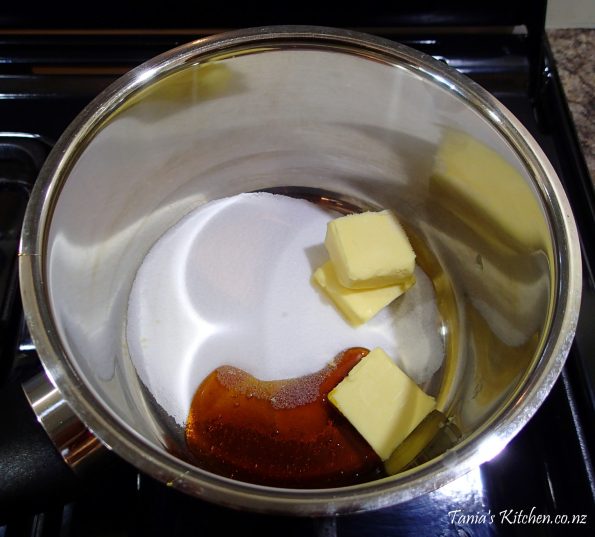 Over a medium heat bring the three ingredients to the boil, stirring occasionally to make sure the sugar doesn’t catch on the bottom. Once boiling, boil for around one minute and then take off the heat. 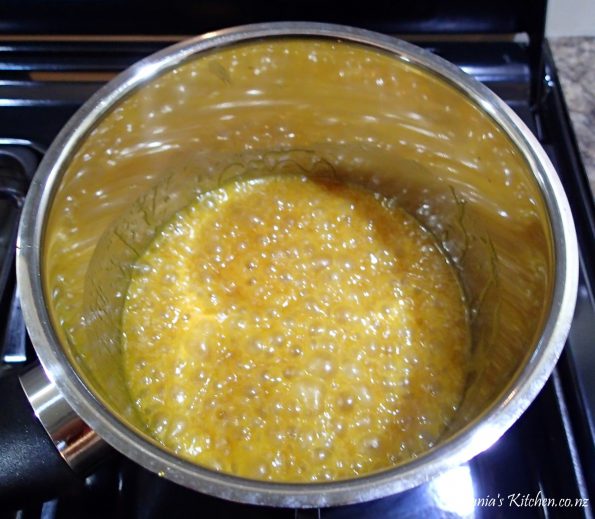 Fold the condensed milk through until well combined and smooth (I love this part). Leave the caramel aside while you make the base. 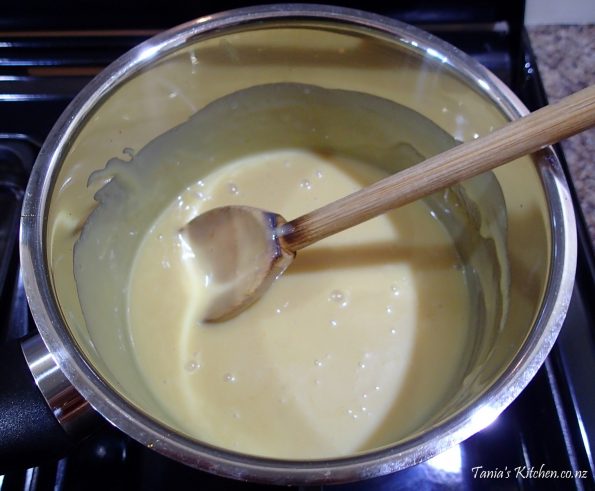 Now, get the tin ready. Line a 30 cm L x 20 cm W x 4 cm D slice tin with non-stick baking paper. At home, I usually use a more standard sized slice tin (27.5 cm L x 18 cm W x 4 cm D) but I like this slice a bit flatter otherwise the base seems a bit too thick under the caramel….disproportionate. You can use the smaller size if you like but it might pay to add 5 minutes to the cooking time as the base will be a bit thicker. When I line my tins I always use cooking spray because nothing ever sticks, it’s cheaper than butter, it’s quick and easy and it doesn’t burn like butter. I lightly spray the tin first so when I am fitting the paper in it doesn’t slide around (you learn these little tips when you work in a busy kitchen and you need to do everything as fast as possible). 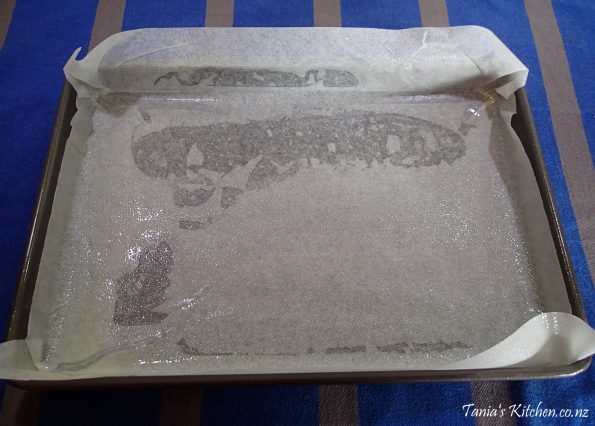 Now that the greased tin is on standby, soften the butter;  butter that has been cut into cubes and left out on the bench for an hour at room temperature is best. I use my microwave with the power button set to Medium or if you have numbers 50 (50 percent or half power) ie; I would soften 600 grams of butter (cut into medium sized cubes) for 60 seconds on medium or half power if I did this on full power, a quarter of it would melt. If I used half melted butter, when I creamed the butter and sugar together it would be too ‘wet’ and then the dough for my base would be really soft and when the slice is cooking the caramel filling will be able to seep right through the base (rather than sit on top of the base and cook).

So next put the softened butter and the first measure of sugar (3/4 cup) in a medium sized bowl. 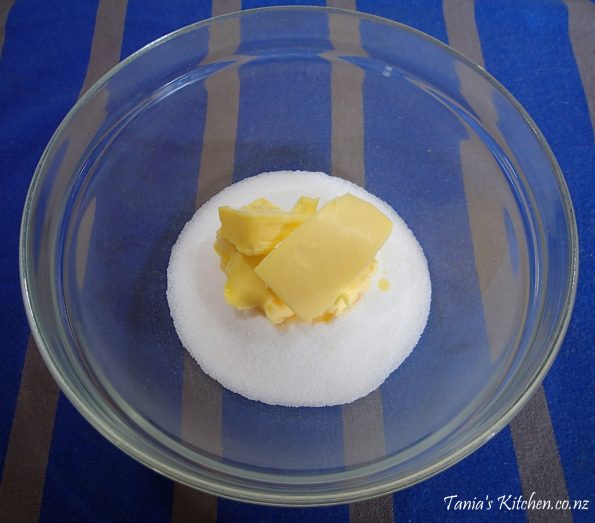 Using an electric beater on medium speed, beat the two ingredients together until they are soft and creamy, around 5 minutes should do it. 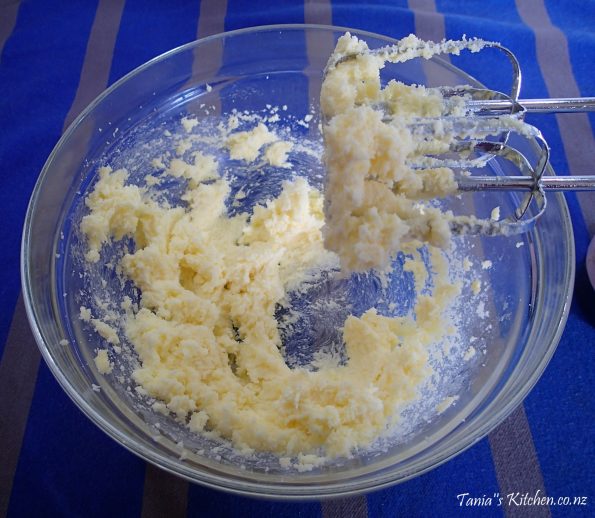 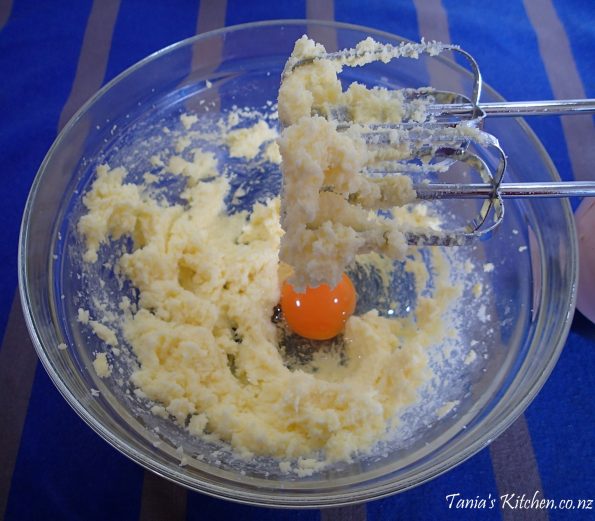 …..still beating on medium speed until it’s all mixed together well. 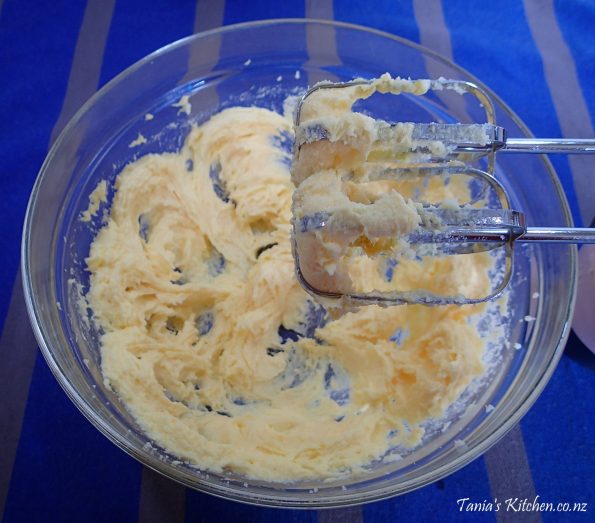 Next, throw in the flour, custard powder and baking powder. 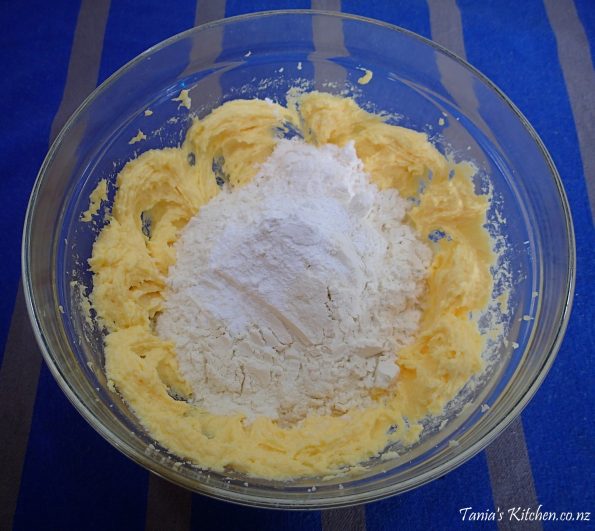 Now turning the beater down to a low speed, or alternatively using a wooden spoon, fold everything together until just combined. You should stop as soon as you can’t see the flour anymore (with everything I bake I usually stop when there is still a wee bit up around the sides of the bowl just to be sure I haven’t over mixed it). Over mixing it may cause the base to be denser and not so light and fluffy. 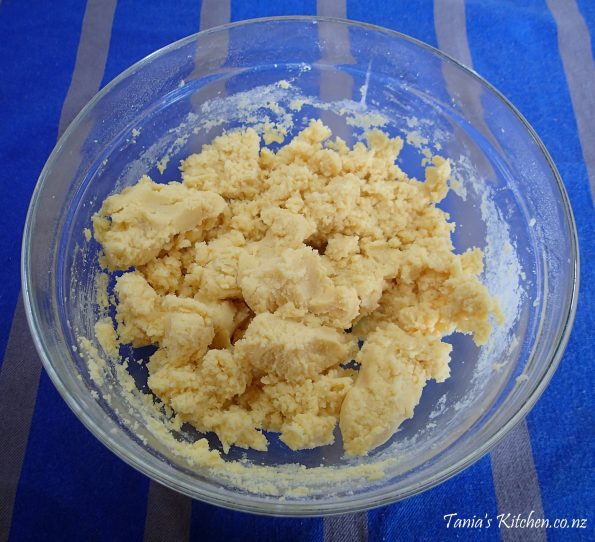 Next, place 100g, or roughly 1/2 cup, of the dough aside and then take your time gently pressing the rest of the dough into the tin, whilst getting it as even as possible. If you press it down to hard it will not rise as much and if there are parts that are thinner than the rest the caramel may seep through to the bottom when it’s cooking, making those parts soggy. 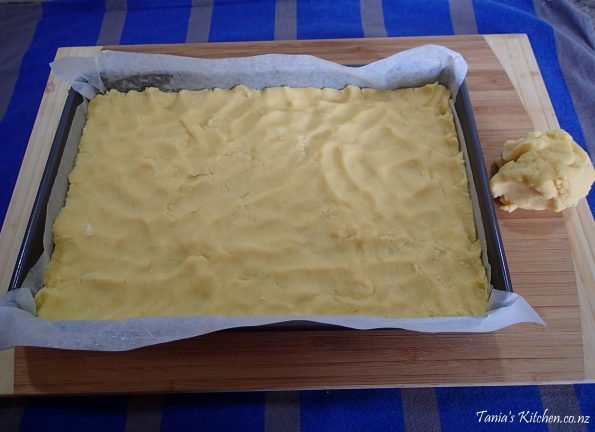 Now evenly spread the yummy caramel over the base and then….lick the spoon. 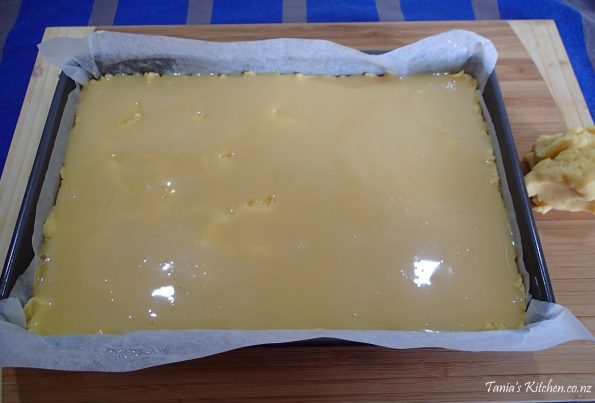 Next gently using your fingers, break the remaining dough into small pieces and place it hickelty pickelty all over the caramel…… 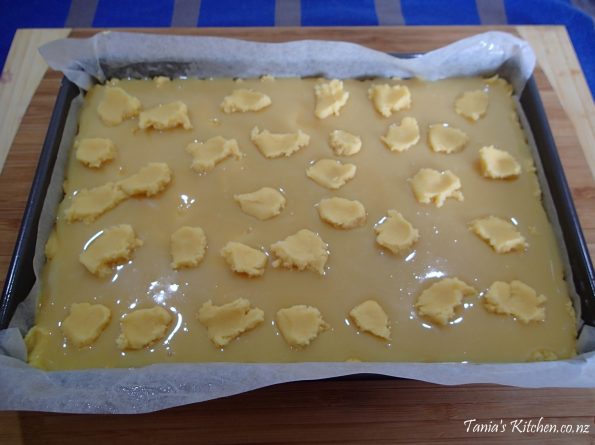 ……and then in between the pieces of dough place the chocolate bits on top of the caramel, (I think the flat side up looks better). 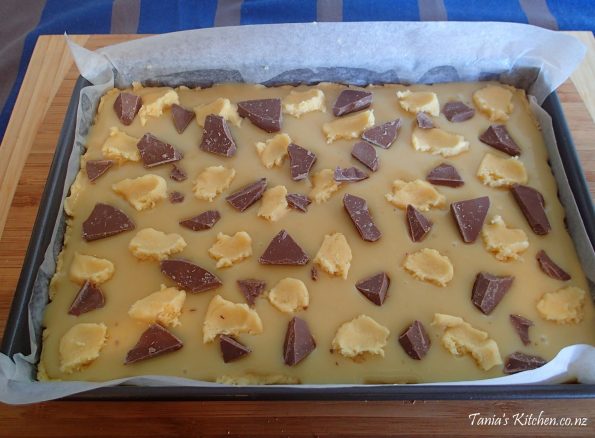 Bake for 30 minutes, or until the dough on top looks golden brown. 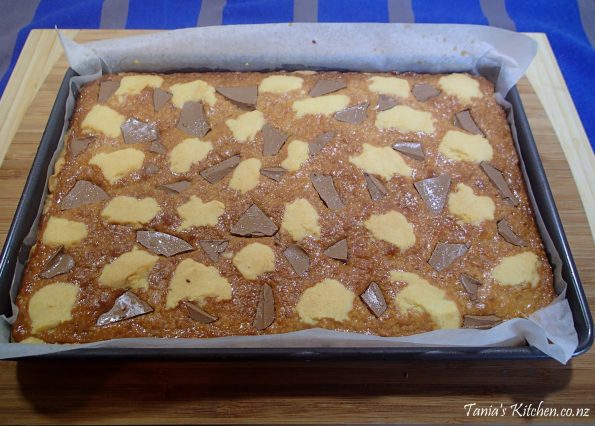 There you go, a great slice to go with a nice latte or hot chocolate and a hit with the kids.

Keepin’ it fresh – Keep in an airtight container, 2 days is best, 3….absolute tops. 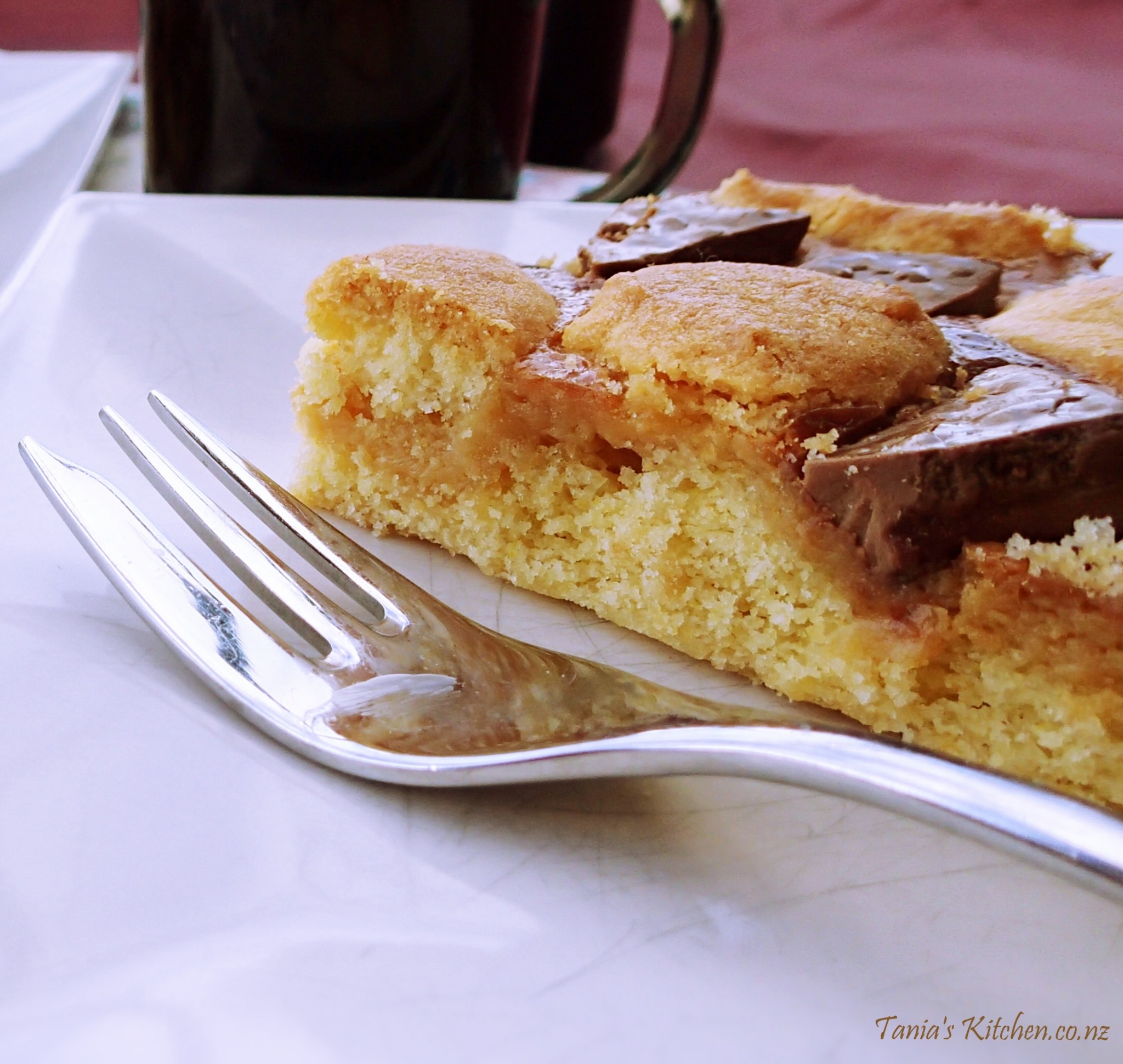 A melt in your mouth Caramel Slice with a soft custard flavoured base, filled with gooey caramel and topped with chunks of milk chocolate.